Ever since her cover of Rihanna’s ‘Work’ became a viral phenomenon in Spain liitle over a year ago, Bad Gyal’s career has been leaving quite the flaring trail behind her. During 2016 she dropped some of the dopest songs in the Hispanic urban scene worldwide, all of her own creation, debuting with ‘Indapanden’, which stands now almost on 3 million views on YouTube. Her first mixtape ‘Slow Wine’ followed before the year ended, earning her a place as the first modern dancehall artist in Spain and featuring massive hits like ‘Fiebre’ and ‘Mercadona’ (these total over 5million plays on Spotify today), all this before even turning 20 years old.

Within a year she’s performed her first macro stages for Barcelona’s Sonar and BAM festivals as well as Benicassim’s FIB. Having debuted halfway through Europe already too (Berlin, Paris, London, Prague, Zurich, Brussels, Stockholm and Rome among others) she’s been collaborating with artists like Dubbel Dutch -producer of some of the best Popcaan songs- or Paul Marmota -of the Mexican collective N.A.A.F.I.- with whom she signed the hipnotic sad dancehall hit ‘Nicest Cocky’.

Her music has been supported by artists like Murlo, Dinamarca, Soulection or the Mad Decent crew, and has been described as “no-fucks-given attitude wrapped in silky Auto-Tune”, “Spanish dancehall queen” or “rising star of the Spanish rap scene” by media like Pitchfork, I-D and The Line Of Best Fit. She’s been featured on The Fader, Remezcla, Vice, Fact and Mixmag among many others fashion outlets too, including Vogue Spain.

Bad Gyal traveled overseas in October for her first shows in Mexico and US. She’ll be joining names such as Amnesia Scanner and Yves Tumor at the Red Bull Music Academy Festival in Los Angeles. She’s currently working on her next mixtape featuring top collaborations, there’s still much to unveil. 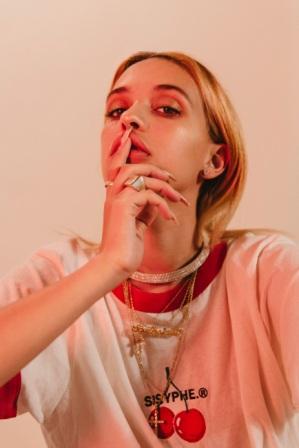