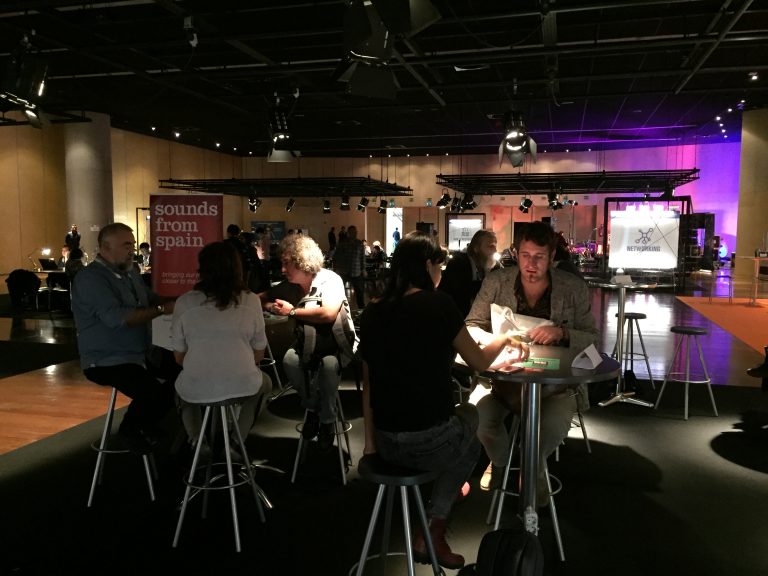 Platform Sounds from Spain (SFS) made a “largely positive” appraisal of its last Bilbao BIME participation, which brought together 14 Spanish companies and more than 20 international industry experts. The Sounds from Spain stand hosted dozens of bilateral meetings that served Spanish record labels, publishers and promoters to make their catalogues and artists known.

The experience during this fourth edition of BIME, held at the end of October, was very encouraging given the diagnosis made last weeks by participants. “Among all, we are getting to make music made in Spain known beyond our borders”, says ICEX manager Margot Gómez-Arnau, when talking about different members of SFS (besides ICEX, other components are Fundación SGAE, AIE, ARTE, Promusicae, UFI and INAEM). “This is the best way for Spanish companies to contact opinion leaders and reference international buyers, those who can help them to internationalize their projects”, adds Carlos García Doval in representation of Promusicae, association in charge of coordinating this initiative.

The perception of those participating in the Bilbao meetings outlines a most encouraging appraisal. “Going to New York or to the South by Southwest festival in Austin would be mostly unworkable without this support”, states Tony Serrano from Murcia promoter Son Buenos, whose band Nunatak performed in the showcase at the Bilbao Kafé Antzokia.

Álex Graneri (En Gira), another reputed artists’ manager, was pleased: “Thanks to the work of Sounds from Spain we can see seven or eight different buyers in a single morning”. “It is a platform that provides great visibility for our musicians abroad”, states Sony Music’s Neus Borrell. One of their artists, Carlos Sadness, passed by the Antzokia stage and sold out. “It is interesting to exchange views with other professionals. You contribute with the creative side and they do with development. It’s good that we can see our faces and understand each other”, thinks the author of rising hits such as Qué electricidad or No vuelvas a Japón.

Also the members of Sonido Vegetal, “gypsy fusion punk” Granada band, had their time at Antzokia to deploy all their energy before the amazed eyes of an international audience. “When you give a face and know someone in person, things flow more easily. You can make contacts with relief, without going bankrupt”, exclaimed Esteban Ruiz, visible head at WeAreWolves Records.

BIME has thus confirmed its candidature as an international reference forum for fostering cultural creativity. After only four editions, its progress line is neatly upwards. More than two thousand accredited professionals joined the event, a figure that was around 1,800 people from 18 countries during the 2015 meeting.