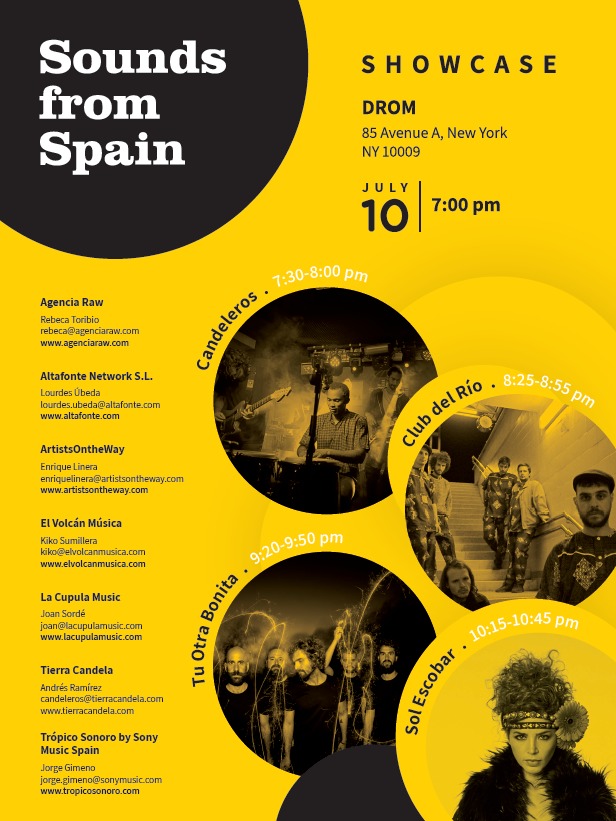 Sounds from Spain returns to the Latin Alternative Music Conference with a new proposal.

FESTIVAL
The bands CANDELEROS, CLUB DEL RÍO, TU OTRA BONITA and SOL ESCOBAR will participate in a Sounds From Spain showcase, which will take place at 7:00 p.m. on Wednesday, July 10, in the DROM Room, at 85th Avenue A in New York.

MARKET
Sounds from Spain will be present at the LAMC market at The Stewart Hotel, where the Spanish companies will meet international promoters, managers, etc.

PRESS ROOM
The bands will participate at the press room, where they will have a very complete schedule of interviews, reports, photo shoots, etc. with all the journalists invited to the event aiming to give broad coverage and dissemination of the artists. International and local press will be attending, so the diffusion will cover both the US and many countries in Latin America.

CONFERENCES
Two of the companies participating in the festival with Sounds from Spain will be part of the LAMC conferences.

On the one hand, the Spanish company Sony Music Spain will participate on July 10 in the panel “From Dive Bars to Superstars” with a presentation of Jorge Gimeno.

And on the other hand, the company El Volcán Música, will participate on July 12 in the panel “Touring in the US vs. Latin America and Spain “, that will take place at the LAMC Offsite @ Live Nation, with a presentation of Kiko Sumillera.