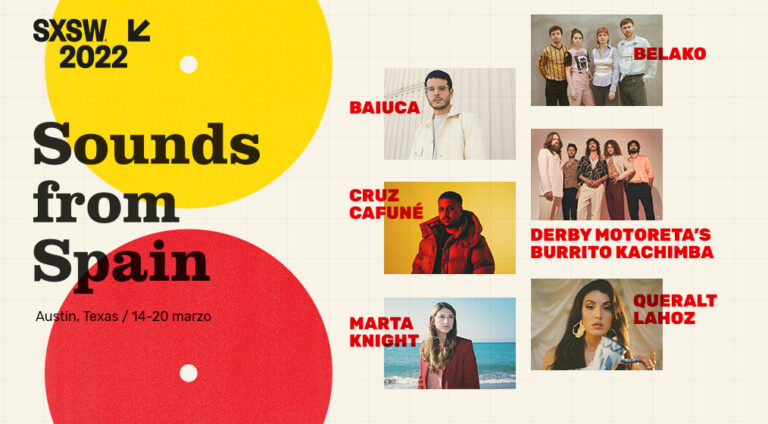 Sounds from Spain returns to Austin, Texas in 2022 to participate at South by Southwest (SXSW) with the best paella and will feature six bands at their showcases with performances from, BAIUCA, BELAKO, CRUZ CAFUNE, DERBY’S MOTORETA BURRITO KACHIMBA, MARTA KNIGHT and QUERALT LAHOZ

Sounds from Spain kicks-off their first official SXSW showcase on March 16 with their infamous, ‘Paella Party’ located this year at Half Step on Rainey Street where you will be able to enjoy their highly acclaimed paella.

The Spanish pavilion will also host a meet-up on March 16 inside the Austin Convention Center with representatives from Spain and Latin America.

SXSW 2022 unites over 15,000 music industry professional and hosts over 2,000 concerts during the week of the music conference.

In recent editions, SXSW has featured diverse artists to their line-up welcoming other genres of music that incorporate artistic innovations with a touch of originality.

Spain is known for showcasing original and diverse musical artists from their country that, together with gastronomy, make the participation of Sounds from Spain an innovative and creative showcase to present to the public attending the conference in Austin, Texas.

Spanish wine and our famous Paella will be served

Want to know more about the bands that are part of Sounds from Spain at SXSW 2022?

BAIUCA. Pagan folktronica from Galicia. That’s the musical concept producer Baiuca explores in his music, connecting the mystical folklore of the region with global bass beats. The Galician producer has become one of the most important alchemists when it comes to recovering traditional music & codes and bringing them not only to a contemporary setting, but to a future one as well. His second album ‘Embruxo’ (The Spell) is one of the best alt.latino albums in 2021 by NPR.

CRUZ CAFUNÉ. With a soulful electronic sound rooted in the tropics, singer, rapper and songwriter from the Canary Islands, Cruz Cafuné burst onto the scene with his collective BNMP (Broke Niños Make Pesos). The island vibes and their fresh sound brought them a great underground following, quickly capturing the attention of the Spanish urban scene. His Canarian cultural background – halfway between Africa, Europe and Latin America -, his relaxed melodies in contrast to the direct lyrics and his revised pop music approach have made him a half crooner-half rapper with an eclectic and interesting body of work.

DERBY MOTORETA’S BURRITO KACHIMBA. Close your eyes and imagine Led Zeppelin going for beers and tapas in Alameda de Hércules, Seville. Fantasize about Tommy Iommi in the small hours together with the first formation of Veneno. Think The Stooges drunk on sherry. Ok, now open your eyes. You don’t have to imagine anymore because all of this …exists now. And with a name that you would never have come up with in a month of Sundays: Derby Motoreta’s Burrito Kachimba.

MARTA KNIGHT. Marta Knight says she only wants to craft songs to listen to in her room when everyone is asleep. The 23-year-old Barcelonan, who spent her adolescence obsessed with Oasis, The Stone Roses and The Smiths before falling hard for singer-songwriters like Johnny Cash, Tracy Chapman, and Bob Dylan, writes for the nocturnal space between midnight and the dawn. Her songs soundtrack late-night confessions–the moments when one is just as likely to fall in love as they are to stare at the ceiling, wondering just what it is they’re doing with their lives and where anything could possibly lead. She describes “Creations,” her newest single, as about the people and places that leave marks on us–the parties we don’t go to, the movies that make us rethink our place in the universe, and the songs we cry to on a shitty day.

QUERALT LAHOZ. Queralt Lahoz’s music is crossed by Latin, street and urban sounds: soul, hip hop, trap and dancehall dialogue with grace and naturalness over an aura of coplas and boleros that emerge spontaneously in a kind of irrepressible revelation of her Flamenco origins and her personal landscapes. Born in Santa Coloma de Gramanet, Andalusian migration pole on the outskirts of Barcelona where a large part of her family moved from Granada, she rests on her tradition, she relies on the genealogy of the working women of her life and her suburban childhood, to draw a flowery bridge between past, present and future, which gives her music an unmistakable character. With this combination, Queralt Lahoz defies convention and is capable of transmitting the strength and delicacy of a survivor.”