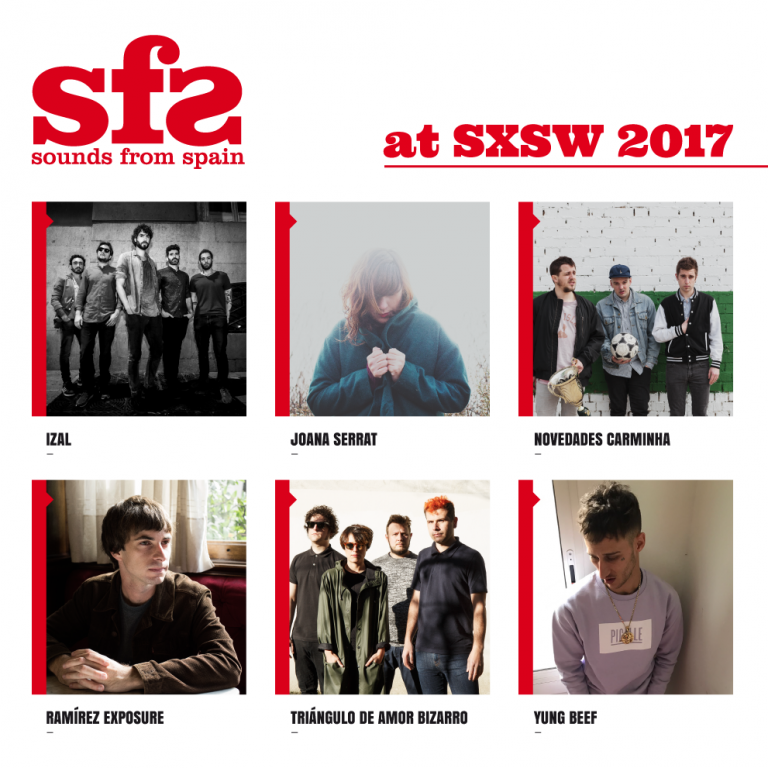 SOUNDS FROM SPAIN will lend its support to six bands from Spain in the upcoming edition of South by South West which will take place in March 2017 in Austin, Texas.  They are: IZAL, JOANA SERRAT, NOVEDADES CARMINHA, RAMIREZ EXPOSURE, TRIANGULO DE AMOR BIZARRO and YUNG BEEF. These groups, previously chosen by the festival itself, have been agreed upon to participate by the organizations that form part of the supporting platform from a total of over 40 options auditioned. On March 15 and 16 all six bands will play in the concerts organized by SOUND FROM SPAIN at the South by South West Show.

This is the tenth consecutive year in which SOUNDS FROM SPAIN sponsors Spanish music in SXSW. Hinds, Macaco, Dorian, Nacho Vegas, Supersubmarina, Lori Meyers, are some of the groups that have previously played in South by Southwest. More than 15,000 music professionals will be present, including record labels, managers and industry press who will have the opportunity to attend almost 2,000 concerts.

SOUNDS FROM SPAIN will have an official pavilion for the Spanish companies attending the festival allowing them the opportunity to meet with the most prominent international producers and record labels.

SOUNDS FROM SPAIN is the supporting platform for the internalization of the music industry in Spain which is a division of ICEX Spain Exports and Investments, the National Institute of Theater Arts & Music (INAEM), the SGAE Foundation, the Society of Performing Artists (AIE), the Technical Performance Representatives (A.R.T.E), the Music Producers of Spain (PROMUSICAE) and the Independent Radio Union (UFI).

The objective of SOUNDS FROM SPAIN is to promote Spanish music exports, encouraging the presence of professionals from the music industry in the most important international conferences such as South by Southwest (Austin), Musikmesse (Frankfurt) LAMC (New York), and Womex.

More information about the music groups:

Veterans from previous different projects, with over 10 years of experience in the music industry, IZAL was founded by 5 musicians in late 2010. In only five years the group has become prominent in the Spanish indie pop-rock scene, spearheading the charts in most of the music festivals in our country.

Joana Serrat is working on her third record that will undoubtedly be one of the most anticipated of the season.  Her tour includes Portugal, England, Holland, Luxembourg and Belgium.  Serrat can also boast being one of the most celebrated and high profile artists in Spain.

Novedades Carminha is a garage punk rock trio from Galicia but born in Madrid in early 2007.  Their music is clearly influenced by garage and punk rock of the late 70’s from the UK and USA. Their strong style clearly shows an ability to create the proper atmosphere so the audience can also form part of the performance.

Their record “Young Is The New Old” is an evolution from their previous work and they collaborated with Ken Stringfellow, Marc Jonson, Brian Young (The Jesus And Mary Chain, Fountains Of Wayne) and Richard Lloyd (Television). Their concert in the FIB 2016 received excellent reviews from the press.

2016 has been a year full of awards for their extraordinary records, excellent reviews and strong performances this group has put out “Salve Discordia,” its fourth album with a smashing sound which has once more rendered the industry press at their feet.

Born in Granadaat 17, Yung Beef moved to Marseiles and then to London where he was able to develop his musical talent in the London hip hop underground movement. His professional career started at 24, when he created PXXR GVNG, a Spanish trap group, along with Khaled, D. Gómez and Steve Lean.