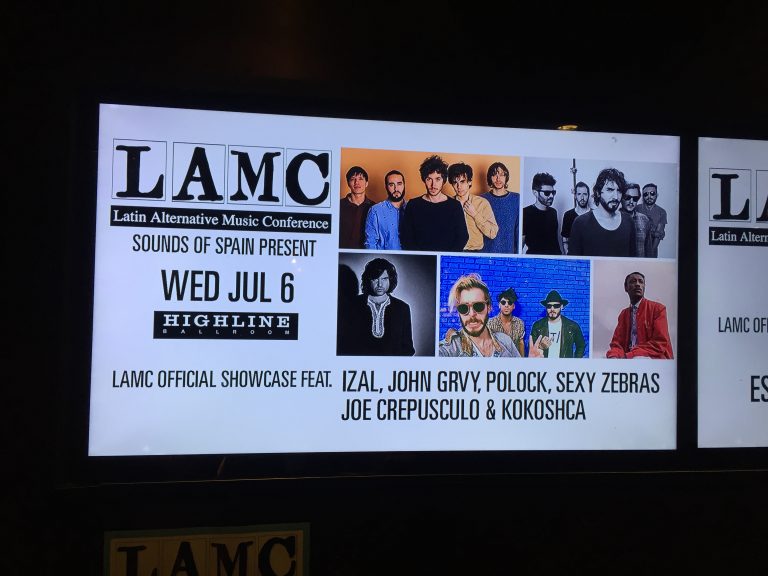 Sounds from Spain will be present at LAMC-Latin Alternative Music Conference, from July 6-9, 2016 in New York, USA. The government agency ICEX Spain Export and Investment, in collaboration with the National Institute of Performing Arts and Music (INAEM), will organize this participation that includes 6 bands and 8 music companies from Spain.

Sounds from Spain is the platform that coordinates the internationalization of the Spanish music industry. Besides ICEX and INAEM, it is also linked to the SGAE Foundation, the Society of Artists (IEA), the Association of Entertainment Technical Representatives (ARTE), the music Producers of Spain (Promusicae) and the Independent Phonographic Union (UFI).

LAMC, which will celebrate this year its 17th edition is considered the most important independent festival of Latin music as it encompasses almost all genres and all fusions, the best of Latin music and the new sounds of rock, hip – hop, indie, alternative and electronic music, and it has become in recent years the most important showcase for new trends in the latin musical industry.

In past editions, more than 1,250 leading figures from the industry have come together to participate in panels, press conferences and networking meetings. More than 30,000 music fans and industry members have attended LAMC concerts, conferences and markets throughout New York City. Among the artists who have participated in this event are: Pitbull, Cafe Tacuba, Calle 13, Anne Tijoux, Los Amigos Invisibles and many more.

The Spanish participation will be structured in two parts: Market and Festival

A Space Spain that will be a meeting point for the Spanish companies where they will greet and interact with promoters, managers, etc. Because it is an event with a limited number of registered attendees, its profile is unique and very professional.

Seven leading Spanish companies will be at LAMC. They are from different sectors of music, from representatives of artists to record companies: VOLCAN PRODUCCIONES, DUNES SHOW, EUREKA DISCOS, GROUND CONTROL, HOOK MANAGEMENT, SONBUENOS and SOUND BOY.

(There will be other LAMC artists on this lineup)