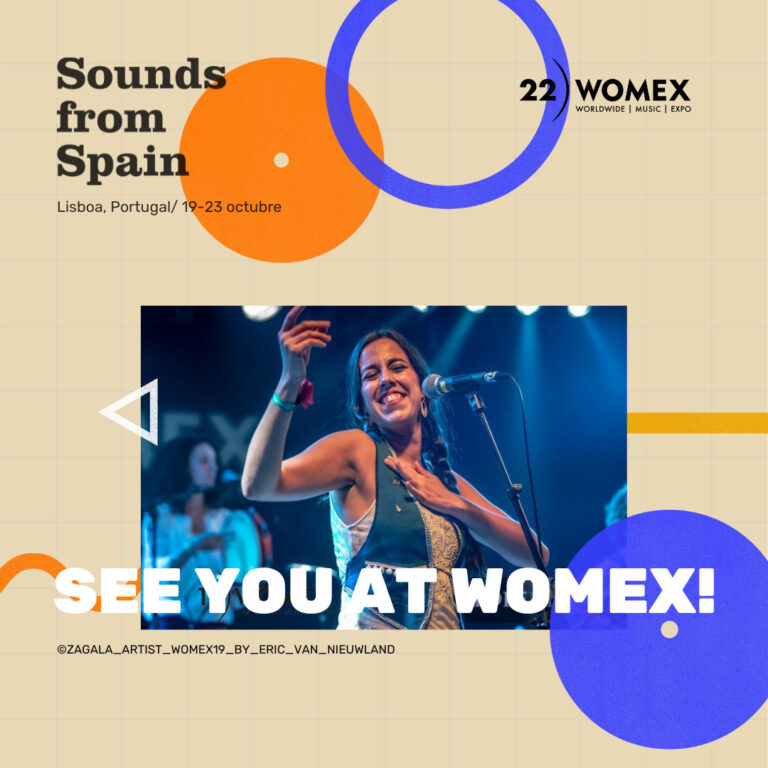 WOMEX – Worldwide Music Expo – is the most international and culturally diverse music meeting in the world and the biggest conference of the global music scene, featuring a trade fair, talks, films and showcase concerts.

Over 2,600 professionals (including 260 performing artists) come together every October from 90 countries, making WOMEX the leading networking platform for the world music industry. Its musical spectrum is unparalleled in the international showcase performance market, ranging from the most traditional to the new global local underground, embracing folk, roots, jazz, local and diaspora cultures as much as urban and electronic sounds from all over the globe.

7 stages, around 700 exhibiting companies, 100+ speakers, films, an opening concert and an award ceremony across five packed networking days and rather short nights.

The event remains devoted to facilitating and promoting the global music industry and providing a platform to connect, inspire and share experiences, enabling new partnerships across transcontinental markets and an open economic and international cultural dialogue.

SOUNDS FROM SPAIN ACTIVITY AT WOMEX

The Sounds from Spain pavilion will be located at stands 124-131 in the Arena Hall-Altice Arena, the venue chosen by WOMEX for its Lisbon edition.

In the 2022 edition, Sounds from Spain supports the showcase of flamenco artist Israel Fernández, part of the official WOMEX programme, which will take place at the Theatre Stage – Teatro Tivoli in Lisbon, on 20 October at 23:00.

Israel Fernández is one of the most celebrated flamenco performers of his generation. Renowned for infusing the traditional Spanish genre with his own unique personality and flair, to date Fernández has released four albums including ‘Naranjas Sobre la Nieve’, ‘Con Hilo De Oro Fino’, ‘Universo Pastora’, and ‘Amor’. Recently, the artist has worked with the likes of El Guincho (ROSALíA, FKA twigs) and Diego del Morao on a range of single releases such as ‘La Inocencia’ and ‘En La Feria De La Bambera’.

“A “cantaor” of the future who likes to lose control” ABC

On Friday 21 October at 13h, Sounds from Spain invites professionals attending WOMEX to enjoy a glass of Spanish wine at the pavilion, located at stands 124-131 in the Arena Hall.

Offering unique, magical, special and unrepeatable performances since 2003, Arte por Derecho is a flamenco booking and management company based in Barcelona. They specialize in emerging artists who represent the world of contemporary and avant-garde flamenco, as well as in consolidated artists. Their lave to flamenco and aim to share it with audiences from all over the world is the core oftheir activity

Escenamusic equals passion for the stage. Their work focuses on artist management and promotion. event production and touring. With offices in Barcelona and Buenos Aires. Escenamusic has created a cultural bridge between Europe and Latin America over two decades of activity. A wide range of artists and companies take part oftheir history in performing arts. such as Concha Buika. Sílvia Pérez Cruz. Dulce Pontes or Estrella Morente. among others. Nowadays. their catalogue boasts a wide range of artists with whom Escenamusic works closely from the creation process in arder to being involved with the artists they work with.

Guspira is a sub-brand of Rhythm and Flow, a booking and management agency with 20 years of experience. At WOMEX, they present: La Sra. Tomasa. a skillful merge of electronics and live music that blends Latin flavoured rhythms, from funk, reggae. and hip hop to drum ‘n bass. with fresh urban influences and electronic sounds; and El Pony Pisador, a five-piece band from Barcelona that mixes folk and traditional music from all over the world in perfect balance between virtuosity and a sense of humour. During 2022, these two bands have performed around 100 performances around the world, including all over Europa, US, or Canada.

Based in Madrid, La Parcería is a collective of thought and creation that gathers around the production of artistic projects and prometes creativity asan instrument for activating intercultural dynamics. They run a venue where they produce and present visual arts. contemporary creation and music. Their management activity comes naturally to them. since they have presented several bands in Madrid in recent years. in both their venue and other renowned stages. In WOMEX. they represent flamenco composer and singer La Jose. Puerto Rican musician and producer Peré Oudav and Ogun Afrobeat. the band leaded by Nigerian artist Akin Onasaya.

Mapamundi Música roster includes sorne of the European artists who are making the music of their traditions grow in the 21st century, artists who are based on excellence and a deep knowledge of their cultural legacy. Artists who are devoted to the public and open to carrying out activities beyond a simple concert. Since 2007. they have had presence in all over Europe. India. South Korea. Algeria or Uzbekistan. A company founded and managed by Araceli Tzigane. a key actor on the dissemination of world and traditional music. they offer a 360º service and align with their clients to create a moment that will expand the mental boundaries of their audience.

Producciones Submarinas is a management and booking agency born in 2010 and based in Spain. After sorne years working on the record label business, Marina Roveta founded  her artist management company and, afterwards, asan international booking agency. PS is focused on the global career management of the renowned Spanish pop artist David Otero as well as management and international booking of Pipo Romero, a mind-blowing acoustic guitarist and brilliant composerfrom Cádiz (Spain) who blends an original compendium of styles from around the world including folk, flamenco, classical, country, celtic music and many more.

Sierra Contratación Artística is a booking and management agency that works with artists who come from an extensive variety of musical backgrounds whose starting point is traditional music. Unique and original projects. reflecting the rich diversity oftoday’s world music landscape. With more than 15 years of experience in the Cultural lndustry. Sierra Contratación Artística has developed projects within sorne of the most important international stages. In their path and artistic accompaniment. they understand and stand far music asan art. in the broadest sense ofthe word. that must unite cultures and break down borders in an increasingly globalised world. Music as a universal right. From all and far all.

Sounds From Spain is an initiative to support, promote and strenght the Spanish music industry around the world, created by public institutions as ICEX and INAEM, and private entities as Fundación SGAE, AIE, ARTE, PROMUSICAE and UFI. Our brand, Sounds from Spain, is an important asset for companies and bands in the international markets.