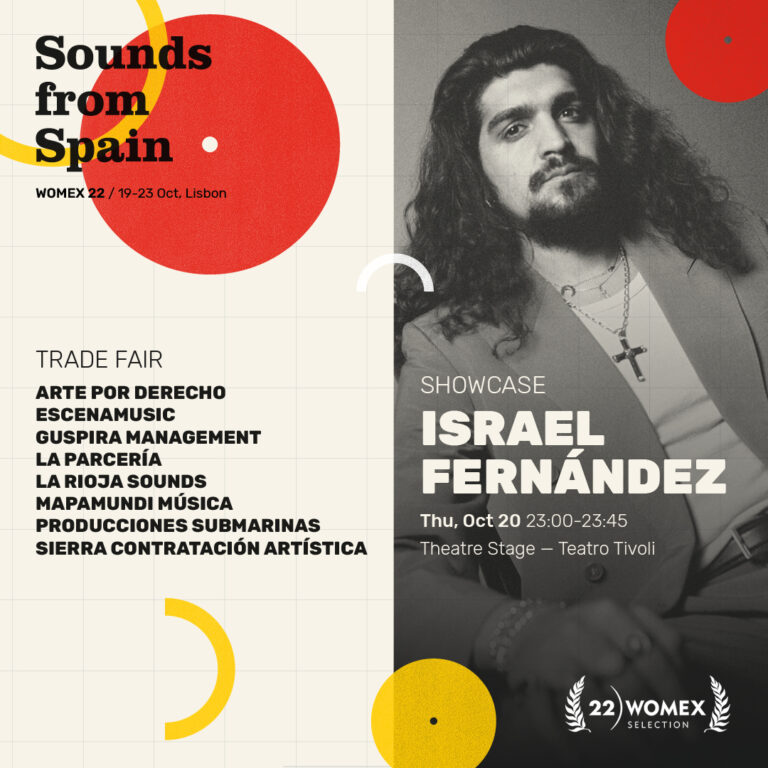 SOUNDS FROM SPAIN returns to WOMEX 2021 on another edition that will take place in Lisbon (Portugal), from October 19th to 23rd.

SOUNDS FROM SPAIN will be present in the market with eight music companies that will have the opportunity to meet with concert and festival promoters, record labels, distributors, and international media. Those companies are: ARTE POR DERECHO, ESCENAMUSIC, GUSPIRA MANAGEMENT, LA PARCERÍA, LA RIOJA SOUNDS, MAPAMUNDI MÚSICA, PRODUCCIONES SUBMARINAS and SIERRA CONTRATACIÓN ARTÍSTICA.

In addition, SOUNDS FROM SPAIN supports the showcase of flamenco singer Israel Fernandez at Teatro Tivoli on October 20th at 23h as part of the WOMEX OFFICIAL selection.

At the SOUNDS FROM SPAIN booth, the World Music companies based in Spain will have the opportunity to learn about the internationalization support programs led by the Administration and the services offered by the sectoral associations.

We are looking forward to meeting you. Find our booths on the Arena Hall, stands 124-131.